Congratulations to Josh Haynes on his international success at the Chocolate Cup in Hungary this summer in his Optimist dinghy.  Josh received the silver medal, tied on equal points with the winner, the Hungarian National Champion, Gyapjas Zsombor, but came second after the tie break rules were applied.

The eight races included a variety of conditions including thunder storms and Josh commented “I just felt that I had the pace to do well and I know that’s a lot to do with my HD sail.  I’m really pleased I had a great event.  This year has been amazing.”

The IOCA UK National Development Team of eight sailors had enjoyed three days of training prior to the International event at the Spartacus Sailing Club in Hungary on Lake Balaton.  The venue will host the 2013 IODA Optimist European Championship.

Josh has also had previous international success, as he had already picked up his first international trophy earlier this year at the Magic Marine Easter Regatta in Braassemermeer, Holland.

Josh (14) has exclusively used sails made by Andy & Jim throughout his racing career of the last seven years.   He is currently ranked 15th in the IOCA UK rolling ranking.

STOP PRESS
Josh Haynes wins overall championship of Derbyshire Youth Sailing Series for second year and once again it is secured only after a tie break – this time in Josh’s favour.

HD Sails at the Scorpion Nationals

57 Scorpions descended on Paignton for the annual National Championships. With a range of wind strengths racing was incredibly close as demonstrated by how many high scores the front of the fleet had to carry. The exception was Tom Gillard and Ollie Wells who sailed an impressive series to take the overall victory. Behind them Tom & Harvey recorded a series of top 3 results including a dominant win in the breeziest race of the week but a couple of tactical mistakes early in the week left them too much to do to challenge Tom & Ollie for the overall win. At the same time HD sails were halping Andy & Tarren record their best ever nationals result of 5th overall, in the process beating 9 time national champion John Mursell into 6th and 3 time champion Dave Wade in 8th.

After the event Tom said the new sails showed some impressive speed, especially in the breeze and on the reaches and that with a bit more time on the water (the first race was Harvey’s 2nd time ever in a Scorpion) they would be in a very strong position to challenge for more event wins.

Andy Davis wins the Solo Nationals with a race to spare at Mounts Bay Sailing Club.

The week started off with a light on shore breeze, Andy using the Radial Laminate mainsail with HD custom carbon battens won the start and lead to the windward mark, Andy then went on to win the first race by a comfortable margin, a great starter for the series.

Andy showed great consistency throughout the rest of the week with only having two races out of the top of 4, as the week progressed so did the wind, on the last day Andy only needed to finish within four places of Charlie Cumbley. In the penultimate race Andy rounded the windward mark in the early teens, using superb pace Andy sailed through to 2nd over the three lap race in a 20 knots. This gave Andy the 2012 title, this is the second time Andy has won the Solo Nationals.

A big thank you to Winder Boats for lending Andy a Solo, Andy used the Winder mark 2 Solo and Selden D+ mast.

Check out our You Tube Chanel for video taken by Will Loy at the event.

A huge congratulations to Martin Wrigley on winning the UK Optimist Nationals and also finishing 30th at the Optimist World Championships.

It has been 3 years since a British sailor has won using a British made sail and also 10 years since Andy Davis made Hannah Mills’ Optimist sail to Win the Uk Nationals. 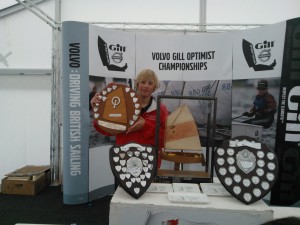 HD Sailmakers Andy & Jim have been making Martins Sails since he first started his Optimist campaign, winning the Optimist nationals is a great achievement and Martin is following in the foot steps of some of our great Olympic sailors!
Over 500 British and International sailors took part in the event held by Pwllheli over the 13th-17th of August. Conditions were very varied, Martin showed excellent speed through out all conditions.HD Sails wish Martin the very best and we’re sure that he will go onto to achieve much more! 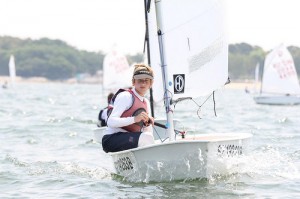 HD Sails continued their 2012 dominance of GP14 Championship events by taking 1st and 2nd overall at the 2012 Irish Nationals.

Mike Senior and Chris White put in their best performance to date winning all 5 races against 39 boats in conditions ranging from 10 knots in the first race to 25+ knots. Mike and Chris most notably renowned for downwind speed in fresh conditions have recently been working hard with HD’s on their big breeze upwind speed. The results of which were clearly noticeable.

HD Sailors Shane MacCarthy and Andy Thompson had a strong second day to finish second overall. Focus now turns to the World Championships starting on the 12th August in Looe, Cornwall where 130 boats are expected to compete.

HD Sails produced another championship winning performance at the GP14 Northern Championships over the 14th/15th July. 29 boats competed at this years event hosted by Derwent Reservoir Sailing Club. 2 races were held on Saturday in light and variable conditions. HD Sailors Mike Senior and Chris White put in a solid performance on the first day to win both races, only to find out later they were found to be OCS in the second. Pressure was then on for Sunday given their discard had already been used.

Motivated by their mistake on Saturday and a good force 5-6 Mike and Chris managed to take the overall win from current GP14 World Champions Ian Dobson and Andy Tunnicliffe posting a 3rd and two 1st’s in testing conditions. For a full report visit the GP14 site here

Mike and Chris have just one more warm-up event for the Worlds at the Irish Nationals over the 21st/22nd July, where they will be looking to fine tune their HD set-up ready for Looe in August. Will keep you updated.

Congratulations to Nick Craig on his podium finish at Warnemunde.

60 OK’s from 6 nations descended on Warnemunde for the German nationals held as part of Warnemunde Woche.

With the World Championships in Denmark looming (160 boats registered) the four days of racing were used by many as a useful warm up event.

We wish Nick the best of luck in Denmark, we will keep you up to date on his progress.

John Billington and Mike Senior dominated the 2012 GP14 Masters Championship winning all 3 races in breezy conditions held from New Quay Yacht Club, Wales. Mike usually seen at the helm of a GP teamed up with top Lark sailor John Billington for the event. Having never sailed together before, they showed fantastic boat speed which made up for the inevitable odd boat handling error! 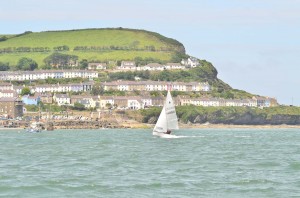 The score line doesn’t however paint the full story. In the first race John and Mike capsized during their first tack and rounded the first mark near the back. With just short 30 minute back to back races planned, John and Mike had much to do. A top 5 was the aim, but some nifty downwind speed and upwind tactical decisions they were quickly back in the mix and managed to just grab the race win at the finish line. Races 2 and 3 were a little more straight forward as they led from start to finish winning both by a comfortable margin.

Attention now turns to the 2012 World Championships in Looe, Cornwall. If you are thinking of GP sails for this years Worlds please don’t hesitate and get your order in soon so you don’t miss out, order slots are filling up fast! Mike will also be attending the GP Bolton Open this Saturday, the Northern Championships at Derwent the week after and the Irish Nationals at Ballyholme  on the 21/22 July and will be happy to chat about his HD set-up to help you with your preparations for this years Worlds.

This Summer Jim & Andy will be taking part in a few Championships. If you would like to meet up or have anything brought down please don’t hesitate to give them a call.

Jim will be attending;

Andy will be attending;

Hope to see you out sailing.

Current Irish National Champions Shane MacCarthy and Andy Davis won all three races at the Leinster Championships. This year the Leinster’s were held at Greystones. 6 races were scheduled but only three completed, Saturday started off with quite light winds but built later in the afternoon to give superb flat out reaches. Sunday the forecast was not so great, the race officer tried to start a race but with very light wind and tide in the same direction it certainly made it difficult to get over the start line, only a handful of boats managed to make it over line and with that the race officer canned the race and the day.

Shane has now won the Leinster’s 3 years in a row and showing great boat speed is certainly looking forward to the World Championships in August.

If you are thinking of GP sails for this years Worlds please don’t hesitate and get your order in soon so you don’t miss out, order slots are filling up fast! 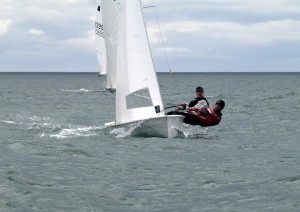