At HD Sails we have a good working relationship with Brightlingsea Sailing Club. Andy Davis has produced many sails for Brightlingsea members from Mirrors up to Merlin Rockets.  In 2014 we were approached to build some BOD Sails for local sailors Colin & Dan Willet. On making the first suit Dan finished second in the 2015 Pye Fleet week, showing the sails had potential.

The BOD sails have been performing well and showing great speed along with winning a few of their regattas.

The mainsail has been built with a radial head & Clew with a cross cut middle. The radials provide stability in the corners and the cross cut middle allows for the shape to flatten and fill out easily with controls, achieving a broader scale in which the sail can work.

The mainsail is built in a 6.5oz polypreg material for durability and performance.

The jib is built with a crosscut panel layout and leech battens. Made using RSQ 5.55 Polykote

The Spinnaker is built with a full radial design. Made using Contenders Superkote 75 the spinnaker has been designed to be a good all rounder. It projects widely for dead running but is able to be full enough to give plenty of power for the reaches. 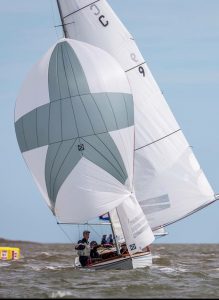